As a result of increasing demand for water, exacerbated by the decades-long drought in the Colorado River system, the Colorado State Engineer is considering a proposal that would impose stricter limitations on the permitting of new groundwater wells in the Yampa River Basin upstream of where the Yampa River meets the Little Snake River.  The Yampa River flows west from its headwaters near Steamboat Springs, in northwest Colorado.  After it is joined by the Little Snake River, it flows to meet the Green River near the Colorado-Utah state line.  From there, the Green River flows south as a major tributary of the Colorado River.

The proposal comes after two years, 2018 and 2020, when scarce water supplies forced the Colorado Division of Water Resources (DWR) to curtail junior water users on the Yampa River to allow a senior rights holder to take water from its point of diversion near the Little Snake confluence.  That is, the Yampa River “went on call” above the Little Snake.  Each call lasted a matter of weeks.  While this was unusual for the lower Yampa River, on most of Colorado’s rivers and streams curtailment of junior water users is routine because DWR considers nearly all the streams in the state to be over-appropriated, including the Yampa River upstream of the Steamboat Springs area.  A stream system is over-appropriated (or water “critical”) when, at some or all times of year, water supplies are inadequate to satisfy the needs of all decreed water rights holders.  Simply put, the demand on the river exceeds the available physical supply.  In fact, the only stream systems that are not over-appropriated are in the northwest and southwest corners of the State, including the Yampa River downstream of its confluence with the Little Snake River.  The State Engineer’s proposed permitting limitations would apply to new, not existing, wells located upstream of where the Yampa River meets the Little Snake River.   Whether DWR will adopt the proposed changes hinges on whether the agency finds that this upstream section of the Yampa River Basin is “over-appropriated.”

What is the geographic scope of this decision? What area will be affected by this?

This decision concerns the Yampa River Basin upstream of its confluence with the Little Snake River.  If you own property or water rights along the Yampa River or tributaries of the Yampa River, this decision could affect you, particularly if you have plans to drill a new groundwater well.  The specific area proposed for designation as over-appropriated is identified in the picture below, labeled as “Figure 2.” 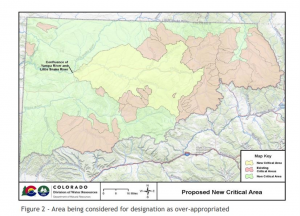 What types of wells and water rights will this designation decision affect?

This designation decision will directly affect:

This designation decision will not directly affect:

How would an “over-appropriated” designation affect the permitting of new wells?

In Colorado, groundwater rights, like surface water rights, are generally subject to administration under the priority system.  However, some smaller-producing wells and wells devoted to specific types of uses may be made “exempt” from administration under the priority system, meaning that DWR will not curtail pumping from these wells to meet the needs of senior water rights holders.  An over-appropriated designation along the Yampa River would affect the permitting of new wells, both exempt and non-exempt, in several ways, foremost of which include: 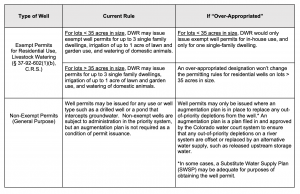 In an area considered to be over-appropriated, DWR applies existing statutes to require augmentation plans or impose other limitations under its authority regarding permitting of domestic exempt wells.  This more conservative approach is applied in the rest of the state and serves to protect existing water rights from injury.  Thus, if the State Engineer designates the Yampa River Basin as over-appropriated, the scope of permissible uses for new exempt wells will be narrowed, and for non-exempt, general purpose wells, DWR will only issue permits where an augmentation plan (or, in some cases, an SWSP) is in place.

What is the timeline for this decision?

The 30-day comment period opened on March 19, 2021.  There is no fixed timeline under which the State Engineer will decide whether to accept the Division Engineer’s proposal or when the designation would formally take effect.

Can I apply for a new well permit under the current rules before any changes take effect?

Yes.  DWR will apply the current well permitting rules in processing well applications up to and until any new over-appropriated designation takes effect.  Once a well permit is issued, the permittee typically has one or two years to drill the well under the terms of the permit and can seek extensions of time in some circumstances.

Where can I learn more about this?