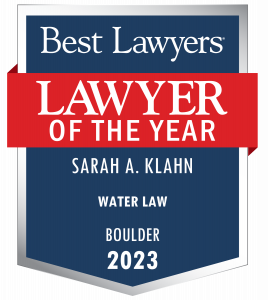 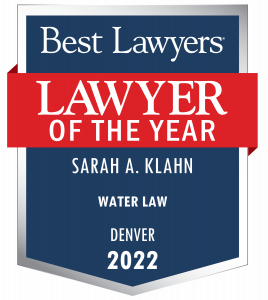 Sarah Klahn has more than 20 years’ experience trying complex water cases, including matters in state district and water court, federal court, and before administrative agencies. To her trial practice, she brings a technical background in science and mathematics, which facilitates her work with technical and engineering experts. Her clients value her willingness to take cases to trial when necessary, as well as her ability to craft durable negotiated solutions to complex matters when possible.

Sarah’s clients include municipalities, districts, ranchers, and private entities in Colorado, New Mexico, and Idaho, for whom she has tried cases of first impression, settled large complex matters, and won appeals in both Idaho and Colorado Supreme Courts. In addition to her expertise in water law, she has also litigated cases involving the extent of agency authority, state/federal jurisdictional questions, water quality, municipal law, and Taxpayer Bill of Rights (TABOR) issues.

Sarah is a member of the trial team representing Texas in Texas v. New Mexico and Colorado (Original No. 141), pending before the United States Supreme Court. In addition to her work on behalf of clients, she has acted as an expert witness on water law process and procedure, including serving as an expert witness in the Colorado redistricting case Hall v. Moreno.

Moving to the other side of the courtroom, Sarah serves as the hearing officer for the Truckee River Operating Agreement, which provides for prospective means to resolve disputes under this complex agreement dividing up the waters of Truckee and Tahoe river basins amongst the two states of California and Nevada as well as a myriad of water users.

Sarah also makes time to give back to her profession in various writing and speaking engagements; annually she is the editor of the Water Law Chapter of Colorado Methods of Practice, the editor of the RMMLF Mining Law chapter on water rights, and she edits the Water Rights-Water Quality chapter in the Colorado Bar Association’s Water Law Benchbook. She is a co-author of Law of Water Resource Utilization published by the ABA in 2019.

In her off hours, Sarah stays immersed in the water world – over the summer, she pursues long distance marathon swimming and has completed several 10k races. She swam the width of Lake Tahoe in 2018. During the winter months, Sarah takes snow water equivalent measurements during backcountry telemark ski expeditions.

Sarah has represented the City of Pocatello, Idaho, in a series of matters of first impression involving the development of conjunctive management of ground and surface water rights.

Sarah also represented the City of Pocatello, Idaho, to prosecute a water right claim in the Snake River Basin Adjudication seeking water rights for the City under a federal law theory based on the 1888 Pocatello Township Act. This case was appealed to the United States Supreme Court, which denied certiorari.

In 2005, Sarah brought suit against the Colorado State Engineer for failure to protect vested water rights of ranching interests from the impacts of groundwater diversions associated with oil and gas development. The Colorado Supreme Court agreed with Sarah’s position and the water court that the State Engineer had an obligation to regulate oil and gas groundwater diversions.

Colorado’s State Engineer determined to regulate oil and gas groundwater diversions by regulation, but gave a pass to regulation of tribal oil and gas development despite the fact that the Southern Ute Indian Tribe had adjudicated rights under the McCarran Amendment as well as state water rights. The Supreme Court reviewed this decision and determined that Tribal development leading to groundwater diversions was susceptible to regulation.

A case similar to Vance was also brought in Wyoming seeking protection of vested water rights for ranching interests.

Sarah has extensive experience in Colorado Water Court, including cases involving diligence, augmentation change of water rights, and the intersection between water quality and water quantity.

Sarah represented the Yellow Jacket Conservancy District in diligence cases in which the primary issue was whether the District, sitting with “holdover” board members, was authorized to seek diligence in the first place. The Supreme Court agreed that it was, and that the “holdovers” retained authority to act on behalf of the District so long as there was no showing of fraud.

While many of Sarah’s clients are institutional or governmental clients, she also represents numerous ranchers, farmers and ditch companies seeking to protect, enhance, or develop their water rights in Colorado and other states in which she is licensed.