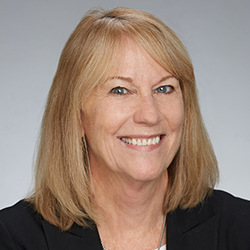 Roberta “Bobbi” Larson returned to Somach Simmons & Dunn as of counsel after serving nearly 8 years with the California Association of Sanitation Agencies (CASA) as executive director. Her legal career has been underscored by an unwavering commitment to water quality advocacy, allowing Bobbi to bring decades of experience, passion, and strategic perspective to clients and colleagues. Above all, Bobbi aims to balance the needs of the economy and the environment to ensure clean, healthy water for generations to come.

Bobbi’s practice emphasizes water quality law, recycled water permitting, environmental litigation, and regulatory advice. Bobbi has a passion for writing and helps to mentor young attorneys in the art of drafting clear and persuasive documents.  She also serves as a resource for the professional development of women in water professions.

During her tenure as CASA’s chief executive (2012-2019), Bobbi was recognized for building and nurturing a high-functioning, cohesive team of staff and consultants, allowing for efficient and effective advocacy on behalf of California municipal wastewater agencies. She was responsible for the overall management of the association, including overseeing the regulatory, legal, legislative and communications programs, and collaborating with a 13-member board of directors. She now serves as a special advisor to the organization, where she provides strategic advice and support on regulatory issues and special projects.

Regulatory Advocate, WateReuse California From 2003 to 2012, provided regulatory affairs assistance to WateReuse California including assisting with drafting of, and advocacy for, a major legislative initiative to recast the state laws governing water recycling.  One of nine stakeholders selected to develop the 2009 Recycled Water Policy, and she was actively engaged in providing comment and revisions to the general permit for recycled water irrigation projects.

Lead Counsel, Petition for Review – Alamitos Barrier On behalf of several entities, including the Water Replenishment District of Southern California, filed a successful petition with the SWRCB to overturn enforceable limitations based on drinking water notification levels included in the water recycling requirements for the Alamitos Barrier project.  In early 2006, the SWRCB agreed with the arguments articulated in the petition and adopted an order holding that given the policies favoring reclamation and reuse of water, it was inappropriate for the Los Angeles Water Board to include notification levels as limitations in the water reclamation requirements.

Co-Principle Investigator, WateReuse Foundation – Assessment of Approaches to Achieve Nationally Consistent Reclaimed Water Standards Served as co-principal investigator for a WateReuse Foundation project to assess potential alternatives to achieving national consistency in the quality and safety of reclaimed water produced through reuse, including the use of recycled water for indirect potable reuse (WRF 08-01). The genesis for the project was the desire for the development of a consistent and accepted treatment and/or monitoring scheme that, if reliably applied, provides enhanced public confidence that a water reuse project is safe.  Role was to identify possible sources of federal authority to develop national regulations and to assist in assessing the legal and practical viability of various alternatives including regulations, guidance, voluntary industry standards and branding.  The final report was submitted in 2010.

Regulatory Advisor, City of Santa Rosa – Incremental Water Recycling Program Assisted with regulatory and compliance matters relating to the City of Santa Rosa’s Incremental Water Recycling Program.  Tasks included an analysis of alternative uses including groundwater recharge. Accomplishments include convening of a regulatory summit with state and federal officials to address the future direction of the City’s program and the development of an Action Plan for addressing potential compliance issues and constraints.

Legal Counsel, Delta Diablo Sanitation District – Recycled Water Program Represented the District in negotiating an agreement with the Contra Costa Water District to allow DDSD to provide recycled water to two new energy generation facilities.  The agreement addressed issues of purveyorship and allowed the District to expedite provision of recycled water service to the power plants during the height of the energy crisis.

Legal Counsel, City of Roseville – Recycled Water Program Provided permitting assistance and legal advice to the City of Roseville related to permitting and compliance issues.  In 2005, represented the City in responding to a legal challenge to its Master Reclamation Permit filed by the DeltaKeeper regarding incidental runoff from recycled water ponds on the City’s golf courses.

On April 6, 2021, the State Water Resources Control Board (State Board) approved the application of the State Wetland Definition and Procedures for Discharges of Dredged or Fill Material to ... Read More